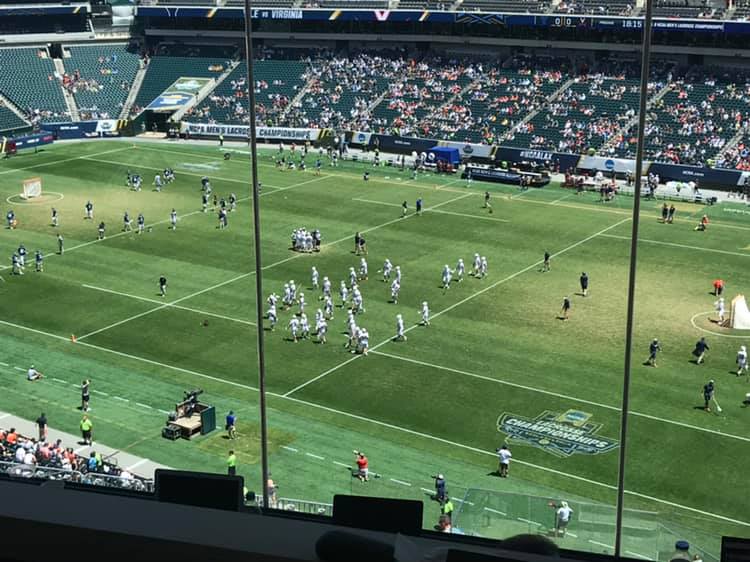 Philadelphia, PA– Memorial Day weekend means a lot of different things to a lot of people. It is a time to reflect on those that gave the ultimate sacrifice to allow everyone else to enjoy the lives they live. For some it is a trip to the beach or to the pool. Others visit with family and friends around the grill. However, for approximately 82,000 people, it is also a time to celebrate the sport they love….Lacrosse.

The NCAA men’s lacrosse championships have been played on Memorial Day weekend for as long as I have been a lacrosse fan. Before joining the media ranks, I attended several championship weekends as a fan. It has been a lifetime of memories for me, my dad, and my brother. In 2003, we enjoyed watching Virginia play in the mud of M&T Bank Stadium (then PSINet) in Baltimore. In 2010, it was the excitement of C.J. Costabile scoring 5 seconds into overtime to win Duke a national championship. 2017 saw the culmination of a lifetime of lacrosse fandom when the Maryland Terrapins won their first title since 1975.

2019 has been a thrilling year for lacrosse fans at any level. Parity seemed to be the theme across all three NCAA divisions. In Division II Merrimack won back to back titles as a send off to Division I. However, it was not without tests along the way. Division III saw a first time champion as Cabrini won the title in front of a hometown crowd. The Division I tournament featured 5 overtime games to lead us to today’s National Championship game between the University of Virginia and defending champs, Yale University.

Yale got things started off two minutes into the game off a Jack Tigh (2G) extra man goal. Moments later, Virginia would answer back as Matt Moore (4G, 1A) took it by himself from the X to tie the game at one. As the team’s settled in to the game, Virginia decided to work bottom to top from the offensive end. This allowed Moore to get his second goal of the game by slipping into the dirty zone and get a below goal line pass from Mikey Herring (1 A) to send the Cavalier’s up 2-1.

In the second quarter it was Yale scoring first. Virginia goalie Alex Rode (8 GA, 13 Saves) came out of the net to double a loose ball, however, Matt Brandau (3G, 2A) won the battle and fed Matt Gaudet (2G) to tie the game at 2. Virginia would not let the game stayed tied very long. Michael Kraus (3G) beat his defender with an over the shoulder shot to put the Cavalier’s up 3-2. Virginia was add another goal by Kraus as he as able to receive a great feed from Jeff Conner (1A) in the middle of the box to send the Cavalier’s up 4-2 mid-way through the quarter. Virginia would then go on to score two goals in the span of eight seconds of game time. First, it was left handed burner from Dox Aitken (2G) followed by face-off win and goal from Petey LaSalla (2G, 4-17 FO) to send Virginia up 6-2 with just over five minutes to play in the second. The score would stay that way going into the halftime break.

The beginning of the third quarter saw T.D. Ierlan (18-24 FO) win the opening face-off and feed John Daniggelis (1G, !A) who was able to double hop into a time and room shot to score for Yale. Just 45 seconds later, Brandau would find Gaudet and Yale would pull within two. However, Virginia would steal a ground ball just after possession was called on the face-off and Ryan Conrad would march down field and bury the one on one goal to send the Cavalier’s up 7-4. The fourth goal in three minutes was scored by Kraus from Moore to improve Virginia’s lead to 8-4. Moore would continue his involvement in the Cavalier offense scoring his third goal of the game by beating his defender from the X. The ensuing faceoff would be won by LaSalla where he would score his second goal of the day as the Cavalier’s went up 10-4. After a brief injury stoppage, Virginia would use almost all off the shot clock before Moore sent home a sidearm low-to-high bullet for his fourth goal of the game. Yale would get the last possession of the quarter put the ball in Brandau’s stick. The Boy’s Latin product was able to avoid and over the head check and put the ball past Alex Rode for this first goal of the game with .4 seconds left on the clock.

Going into the final quarter of play, Virginia lead the game at 11-5. Aitken would get the scoring started in the 4th, running down the right side to get his second goal of the day, increasing the Virginia lead to 12-5. However, Yale would win the ensuing faceoff and work the ball to Brandau, who was able to catch and step into his shot. Mid-way through the quarter Yale’s Jackson Morrill (1A) would find Lucas Cotler (1A) open in the middle of the field to pull the Bulldogs within 5. Brandau would continue the comeback notching his third goal of the game. However, time would be on the Cavalier’ side as they were able to hold the ball most of the final 3 minutes and getting an additional goal from Ian Laviano (1G), who had the goalie out playing defense on him. Yale would notch one more goal with 6.8 seconds left in the game as Virginia switched goalies. The final score was 13-9 as Virginia was crowned the 2019 NCAA Division I Men’s Lacrosse Champions for the sixth time in program history.