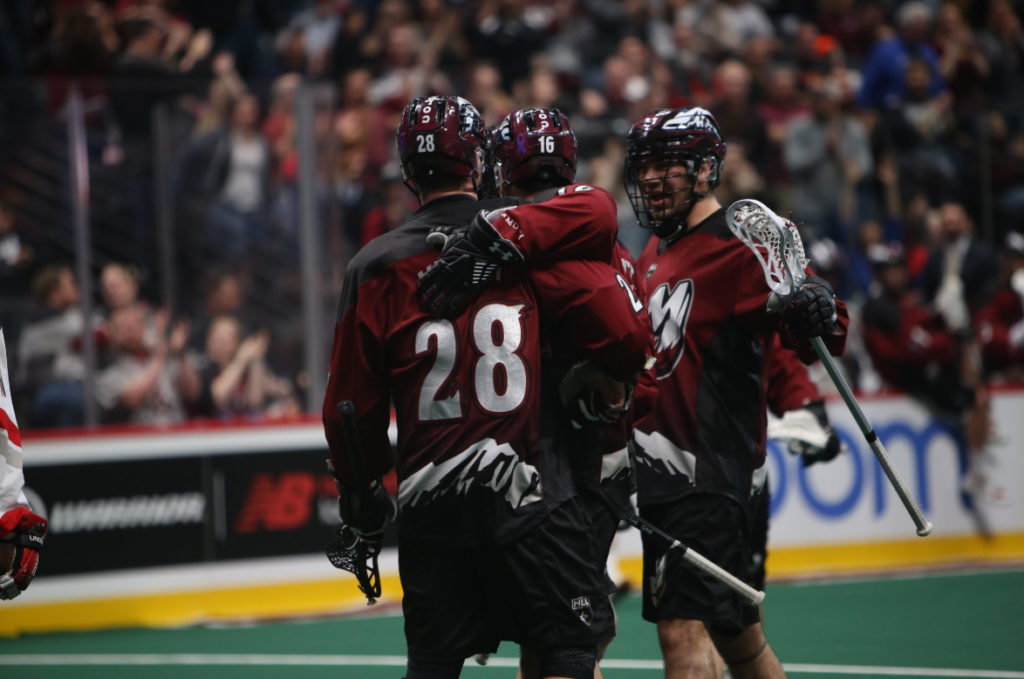 Both Colorado and Calgary had rough times finding the back of the net in the first period. The teams combined for a total of 18 shots in the opening quarter, yet only produced three goals. Thanks to two tallies from Rhys Duch, Calgary held a slim 2-1 lead at the end of the first quarter.

Colorado seemed to jumpstart its offense in the second quarter. The Mammoth were able to free up some space in the middle of the turf through some effective off-ball movement. This allowed them to find the back of the net four times by the end of the period. Defensively, the Mammoth remained tight. However, Joey Cupido and John Lintz were both placed in the box for two minutes for holding and slashing respectively. Colorado’s Dillon Ward held strong in goal, but the Roughnecks were still able to score three times, once on a power play. In the end, Colorado and Calgary headed into the locker room deadlocked at 5-5.

For Colorado, the third period started off rough. Calgary came out refreshed with new energy and rolled to an early 7-5 lead. Stephen Keogh got one back for the Mammoth, but it seemed as though, no matter how hard Colorado tried, Calgary always had an answer. The back-and-forth third period ended with Colorado down 9-7.

Down only two goals to start the fourth, Colorado’s offense certainly showed a sense of urgency firing off quick shots to start the period. Unfortunately, nothing found the back of the net for the first six minutes of the period. After that, it was just too little too late, as even Brad Self’s fourth quarter goal couldn’t get the Mammoth over the hump. Calgary got an empty-netter to finish things off and take home the victory by a final score of 11-8.

With the loss, Colorado falls to 0-2 on the season and will remain in the bottom half of the Western Division standings.

While two losses to begin the 2019 campaign certainly weren’t what the Mammoth were looking for, this loss really shouldn’t alarm anybody. That’s certainly a weird thing to say after a loss, but the Mammoth actually performed pretty well. For starters, Colorado won 17 of the 23 faceoffs today. Additionally, Colorado’s penalty kill unit only allowed one power play goal today. To top it all off, Colorado allowed only eleven goals, much improved from their last performance. All of these statistics show the true promise of this Mammoth team. A performance like this on any other night would give you a pretty solid chance of winning.

Today’s loss can really be attributed to two things: First, Calgary’s Rhys Duch absolutely went off. He finished the day with four goals and two assists. Take him out of the equation and Colorado wins this game easily. Second (and I know that I sound like a broken record saying this again), Colorado’s offensive efficiency was dreadful. The Mammoth landed 46 shots on-goal tonight, yet only eight of them counted for anything. That’s only 17%. In comparison, Calgary scored off of 29% of their shots-on-goal. The Mammoth really need to work on finishing and/or taking smarter shots if they want to dominate offensively in the way they used to.

The Mammoth will be back in action next Saturday at 7pm against the Toronto Rock in their third home game of the season. The Mammoth will finish this home stand one week later on Sunday January 20th at 1pm when they take on Calgary for the second