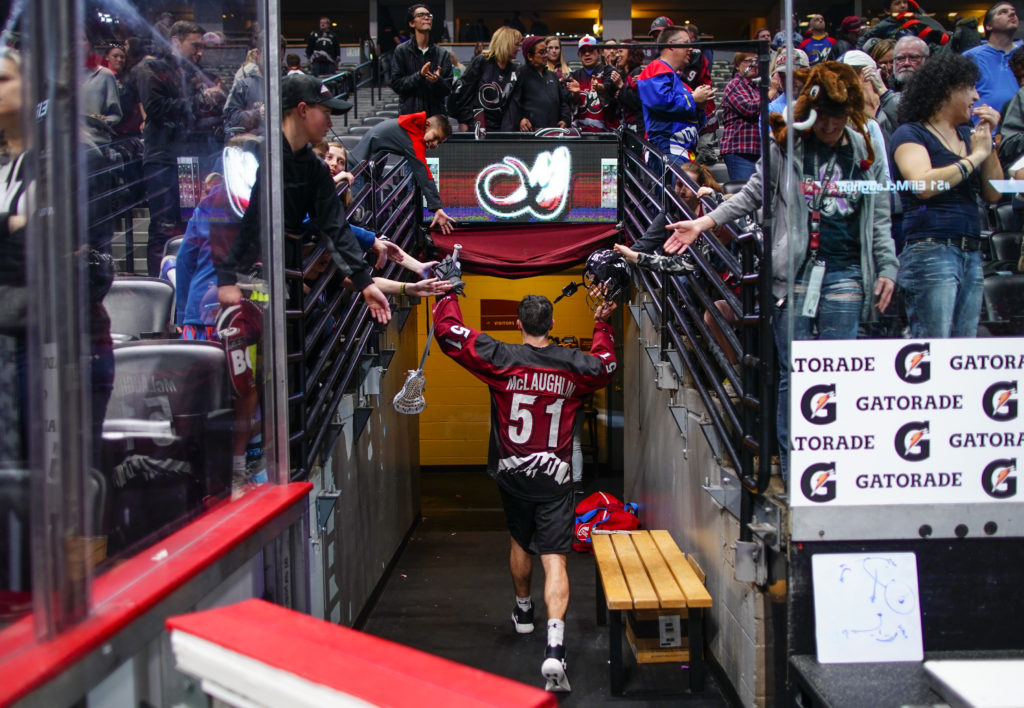 Colorado welcomed the Calgary Roughnecks to the Pepsi Center for the second time this season. In the last meeting, Calgary’s explosive offense led the team to an 11-8 win and appeared to be the better team throughout.

It was easy to tell that it was going to be a good game for Colorado’s offense from the start. After Dan Taylor got Calgary on the board first, the Mammoth stormed back with three goals of their own. Colorado’s Ryan Lee, Chris Wardle, and Ryan Benesch all found the back of the net within three minutes of each other to hand the Mammoth a 3-1 lead at the end of the first quarter.

To start the second, Colorado’s offense stalled just slightly as they failed to score for the first twelve minutes. Calgary took advantage during that time and powered their way to a 4-3 lead. The Roughnecks found a hole right in the middle of the Mammoth defense and exploited it. Once Colorado’s defense tightened up, Eli McLaughlin got things back on track for Colorado and tied things up at four goals apiece. To close out the quarter, Kyle Killen fired a laser into the back of the net in his first game on an NLL active roster. When the first half came to a close, the Mammoth found themselves in the lead for the first time this season.

While the first half was fun and all, the third quarter likely brought Head Coach Pat Coyle the most joy. Colorado played its best lacrosse of the year in this period as they netted five goals and held the Roughnecks to just three goals and ten shots. At one point, the Mammoth took a commanding 9-5 lead. Eli McLaughlin led the charge during as he recorded one goal and two assists just in the third quarter alone. At the conclusion of the period, the Mammoth led 10-7.

The final quarter brought more of the same for both teams. Colorado dominated defensively as Calgary tried to squeeze something out of their fatigued offense, but it was to no avail. Jacob Ruest and Ryan Benesch added two more goals for Colorado before the final horn sounded. In the end, Colorado walked away with its first victory of 2018-2019 by a final score of 12-7.

After the game, Mammoth Forward Ryan Benesch said, “it definitely feels good to get the monkey off our backs,” adding that he sees this as the first time the Mammoth, “put in a full sixty-minute effort.” Colorado Goaltender Dillon Ward echoed those remarks saying, “it just feels good to get a win. Not the start of the season we wanted, but we’re just looking to build off this now.”

Colorado can credit this win to a few different things. For starters, the Mammoth had a solid first half for the first time this season. The Mammoth are now 1-0 when leading at halftime. The Mammoth also used a strong showing from their man-up and man-down crews on their way to this victory. The Mammoth scored three power-play goals and allowed only one shorthanded goal on five attempts. Finally, the Mammoth had energy that was just on another level tonight. For the first time since the home opener, this team truly looked rejuvenated and ready put in a full-game effort.

Another aspect worth mentioning is the addition of Kyle Killen. Killen was activated for the first time in his NLL career today, and he made the most of the opportunity. Though some jitters were evident (like his illegal substitution penalty), Killen tallied one assist and two goals from his six shots. The Mammoth have weapons on offense already, but another consistent addition like him couldn’t hurt.

With the victory, Colorado improves to 1-3 on the season and will jump up one spot in the Western Division standings. Next week, the Mammoth begin a three-game road trip in Vancouver against the Warriors. From there, it will be on to Buffalo and Philadelphia before Colorado returns home to take on the Georgia Swarm on February 16th.